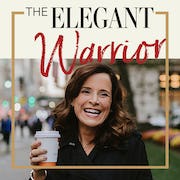 The Elegant Warrior on Amazon

First, you should know my definition of win. It’s from the Cambridge Dictionary, and it is to “receive something positive because you’ve earned it”. You can receive more fun, better relationships, more self awareness, and better outcomes when you earn it by trading your defensiveness for curiosity.

It worked for me. Years ago I’d been in a relationship for a few years and we’d been through a lot together. But suddenly my partner started saying “You’re miserable.” This made me miserable! I got very defensive and I could feel it in my body. My shoulders jumped up and became earrings. My stomach tied itself in knots, my jaw clenched and my hips tightened. So I defended.

“I’m not miserable! Ask anyone. Anyone who knows me will tell you I’m enthusiastic, optimistic and happy. For God’s sake, my nickname used to be Pollyanna!” I’d yell — miserably.

And I’d become more miserable. Then one day I was working on my next book, Advocate to Win, and sharing the 5 Cs of an Advocate. One of those Cs is Curiosity, and I decided to try trading my defensiveness for curiosity. I got curious.

“Am I miserable?” The answer was yes. The thoughts I was thinking about this relationship were making me miserable. As soon as I put down my defenses that became very clear. Then I decided to get even more curious. What if I owned it? “I am miserable.” It didn’t feel good, but it gave me a lot of insight. It was time for a change. After some work and some awareness I was able to change my thoughts about the relationship so that I felt less miserable. And then I was able to leave the relationship and maintain the friendship. No more misery-that was my win! And I earned it by putting down my defenses and being curious.

My clients have had similar results when they’ve traded their defensiveness for curiosity. One of my clients has a husband who called her boring. She told me about this and listed all of her defenses.

She had her defenses ready. But I asked her to trade them for curiosity.

“Are there times you are boring?”

I visually watched her shoulders drop.

“Well, sure. I go to bed early. I don’t always want to watch TV late at night with him. And sometimes I don’t want to go out when he does…..Maybe I AM boring!”

We both laughed. It was no longer such a big deal to be boring when she owned that it was possible. And that meant she could talk to her husband about it without fighting. When you trade defensiveness for curiosity, you tend to fight a whole lot less. They talked about the ways in which she could be less “boring” and he could be less “lazy” (her biggest criticism of him). And now they’re both having a lot more fun.

And trading your defensiveness for curiosity doesn’t mean you have to acquiesce. Sometimes you do have to defend. In those situations, you start with curiosity and then move on to the defenses.

When I was trying cases, I’d always start with curiosity. I defended doctors when their patients sued them. And when the case came in, I’d approach the allegations with curiosity. How could this be true?

The Elegant Warrior Podcast Episode 152 – Alain Hunkins on Being a Strong...

The Elegant Warrior Podcast Episode 154 – Bryan McFarland on the 3×5...
Scroll to top